Sport Touring With An Updated CP3​

The new MT-09 saw quite a sizable amount of updates when it was unveiled by Yamaha late last year. The new Tracer 9 comes with updates in a very similar vein; the motorcycle is getting a pretty big visual overhaul and lots of new tech is finding it’s way over as well.

The Tracer has always been the touring version of the MT-09 (FZ-09). Originally, Yamaha took it upon themselves to take the successful inline-three engine over from the ‘wheelie-machine’ FZ-09, and package it into a far more comfortable touring-style motorcycle. 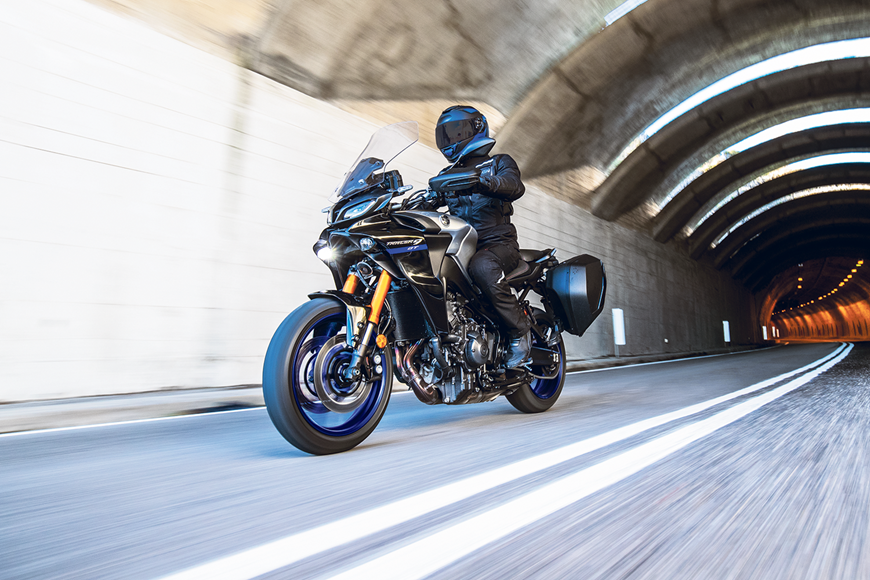 Since the new MT-09 got an engine overhaul with the CP3 being updated for Euro 5 standards, that means that the Tracer 9 also gets the same treatment. The displacement has been bumped up to 890cc with an entire re-design of the inside of the engine. These changes boil down to a 4 horsepower gain and almost 4 pounds of weight saved.

The chassis also receives an update with the new CP3 engine rotated more up-right for a more stable and maneuverable bike thanks to its new center of balance. To continue the ‘feel’ updates, the swingarm got lengthened by 60mm, but the wheelbase remains the same.

Two separate 3″ TFT displays make their way to the dash to give you more control and the ability to closely monitor your data and telemetry while riding.

The GT has been the ‘souped’ up version of the Tracer 900 since it’s initial release, and this year’s model brings that same attitude. The semi-active suspension will be included in this year’s GT version; fully developed by Yamaha and Kayaba. Heated grips, a quick shifter, and color-matched saddle-bags/panniers? Sounds like a good deal to me.

The Tracer 9 and GT will arrive in showrooms this coming March. The Tracer 9 GT will run you a cool $14,899 thanks to all the added features. Unfortunately, Yamaha USA doesn’t have the base Tracer 9 on their website, but for context the European release has it priced at £10,199.

The post 2021 Yamaha Tracer 9 And GT To Come With Semi-Active suspension appeared first on webBikeWorld.