The 2022 Honda CB500X: The Gold “Standard” for Budget Adventure Bikes​

The Honda CB500X has enjoyed a well-deserved reputation as a budget adventure bike and capable street naked for several years, but the 2022 model comes with a few new tricks up its sleeve. Most of the big Japanese bike manufacturers have a knack for producing affordable, versatile standard motorcycles, but Honda may have edged out the competition with an offering like this.

The 2022 model of this bike comes with a brand new Showa inverted SFF-BP fork, which gives the front suspension a major upgrade and allows it to handle noticeably better than earlier versions. You also get dual front disc brakes and a new swingarm, making this already-versatile bike an even more responsive ride. It’s also lighter than previous iterations, thanks to a redesigned front wheel and new radiator, weighing in on the curb at only 439 lbs.

The engine on this thing is a 471cc liquid-cooled parallel twin that puts out 46.9 hp at 8600 rpm and 31.7 lb-ft of torque at 6500 rpm. That gives it lots of mid-range grunt, which makes it ideal for bombing around the city or on the occasional weekend trip. With 65 mpg for its 4.7 gallon tank, it’s also got a range of just over 300 miles—so you definitely won’t be hurting too hard at the pump.

Ultimately, this is an economical little bike that offers more in the way of range, power, and handling than you’d probably expect—unless you’re already familiar with the CB500X, of course. And even if you are, the upgrades it’s been given this year are more than enough to justify its inclusion in the Honda’s 2022 motorcycle lineup.

On this page: we’ve curated specs, features, news, photos/videos, etc. so you can read up on the new 2022 Honda CB500X in one place. 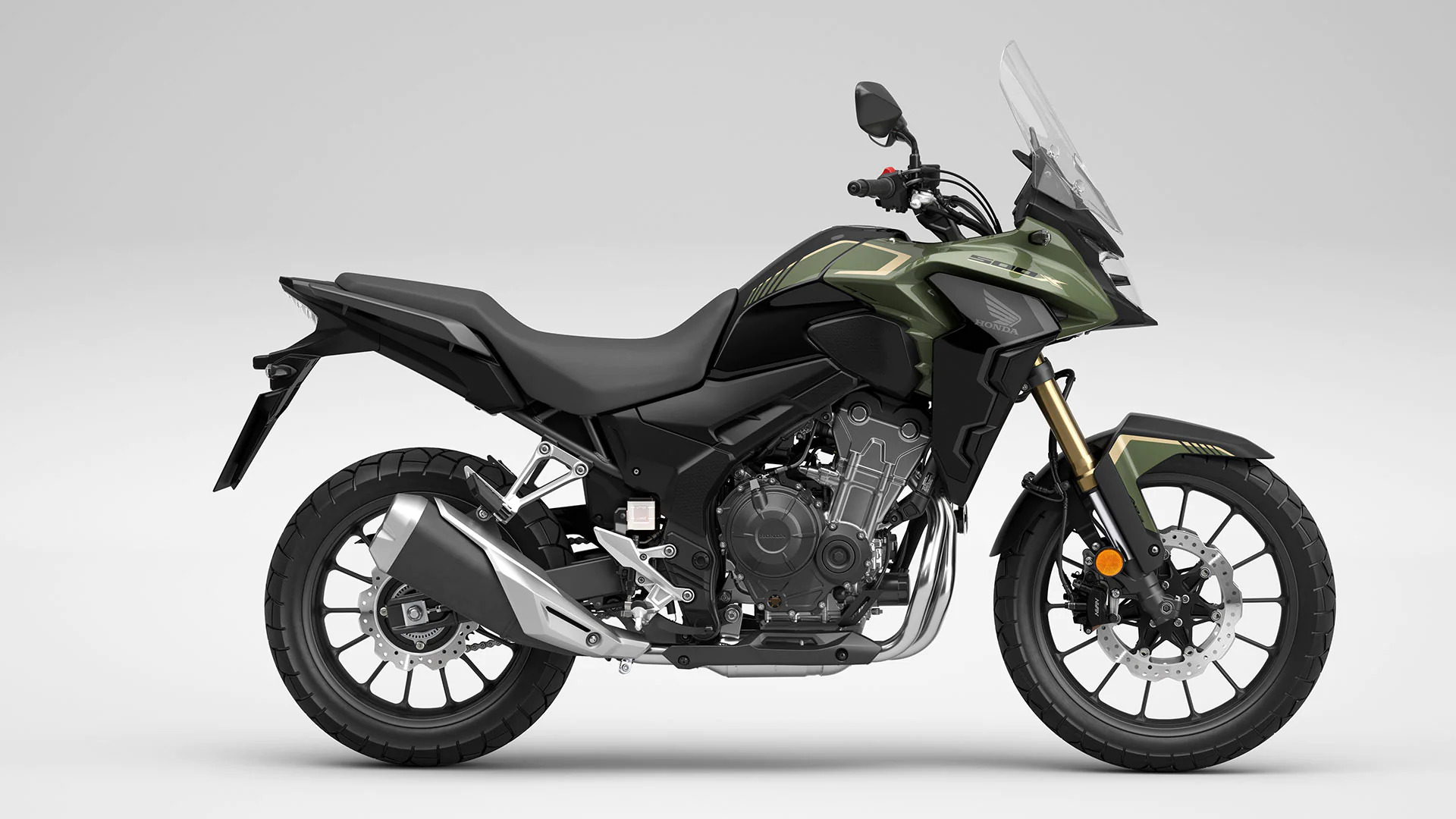 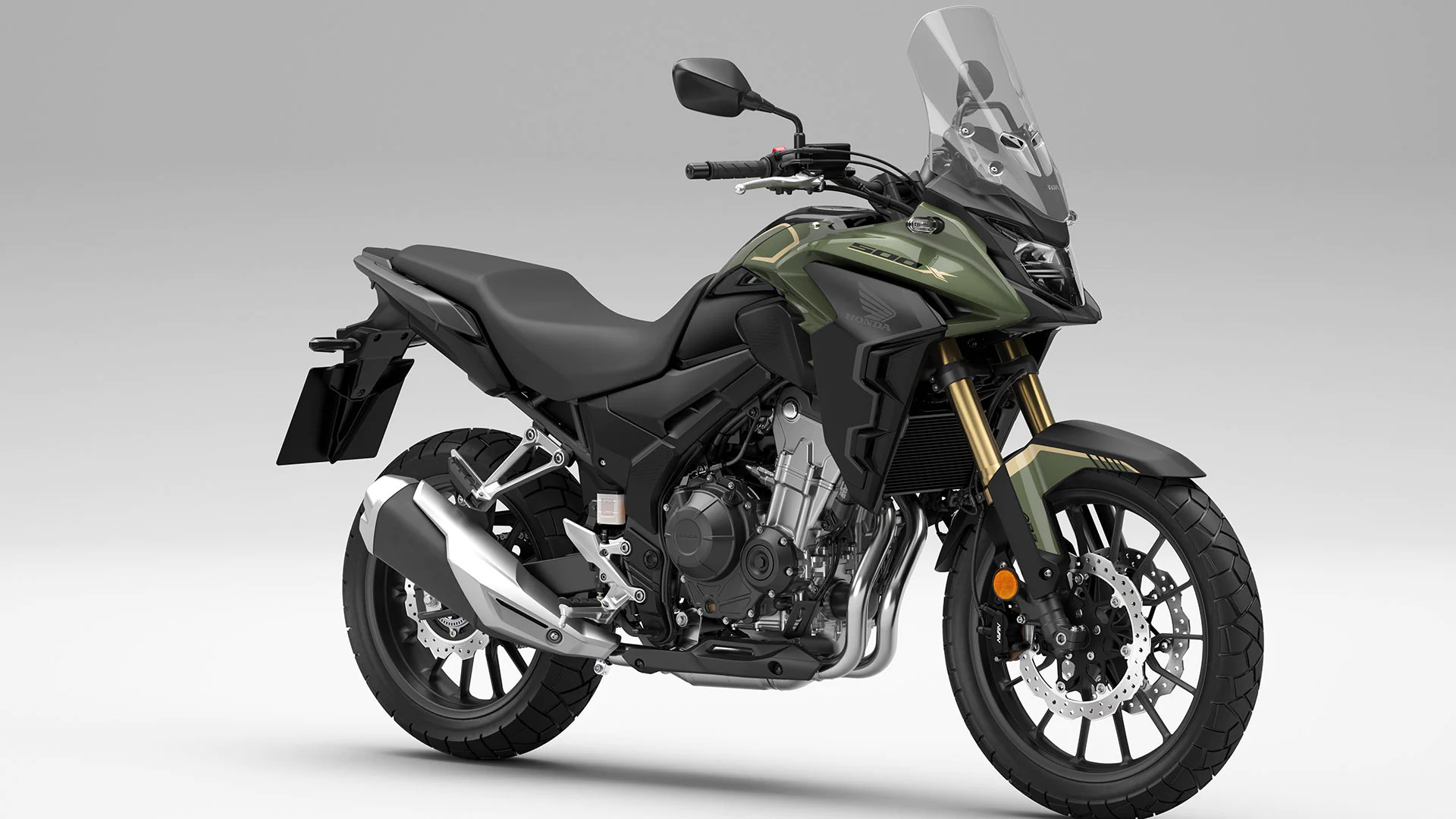 Offering plenty of power and torque in the midrange, the CB500X features a 471cc, liquid-cooled parallel-twin engine. Light, narrow, and powerful, it just strikes the perfect balance of what a mid-sized motorcycle engine should be.
ANTI-LOCK BRAKES

Who doesn’t love the sound of a twin-cylinder motorcycle? We gave the muffler on the CB500X twin mufflers. It’s a little thing, but it’ll make you smile every time you ride.
PROGRAMMED FUEL INJECTION PGM-FI

The injector bodies help the CB500X make even more power. The bike’s PGM-FI continuously monitors several variables to ensure the correct fuel mixture is delivered for the existing riding and atmospheric conditions for crisp throttle response throughout a wide variety of riding conditions.
SLIPPER ASSIST CLUTCH

The slipper/assist clutch lets us lighten up the clutch-lever effort by 45 percent compared to previous systems, but automatically locks up tight when you release it.

Probably the most significant change for 2022 is the long-travel upside-down fork on the CB500X. The inverted design makes the front end much more rigid, for more precise steering input and feedback. The fork itself is a 41mm Showa SFF-BP design—one of the best in its class.
DISC BRAKES

New for 2022, the CB500X now features twin front disc brakes. The two 296mm discs are gripped by twin calipers. Together with the 240mm rear disc brake, you get strong, predictable stopping power. The front-brake lever is also adjustable for a perfect fit.
PRO-LINK® REAR SUSPENSION

A sophisticated chassis with Honda Pro-Link® rear suspension features a shock with nine-stage adjustable spring preload and 5.3 inches of travel to give you a comfortable ride over small bumps, while capably absorbing bigger bumps to increase riding comfort and handling. The shock absorber features large-diameter internals for even better damping characteristics and a smoother ride.
NEW, LIGHTER SWINGARM

For 2022, the CB500X gets a new swingarm that’s over two pounds lighter than the previous generation’s, but just as strong. It’s one of the reasons the entire Honda 500 family handles so well.
SMOOTHER TRANSMISSION

Our engineers profiled the shift dogs in the transmission, to help you get smoother shifts every time. You’ll never see these parts, but you’ll feel their effects.
STEEL-TUBE FRAME

A motorcycle’s frame is the basis for its handling. The CB500X’s diamond-shaped steel-tube mainframe ties to the engine with four mounts, offering a rock-solid foundation for superior ride and handling. It also contributes to the CB500X’s generous 7.1-inch ground clearance.

Like your favorite blue jeans, the CB500X just looks right—tough, capable, no-nonsense. Plus, the adventure-bike posture and seating position let you move around freely—just like your jeans!
DIGITAL INSTRUMENTATION

With a clean, rough-and-ready look, the CB500X’s LED headlight and multi-facet reflector project plenty of light on the road for visibility.
MULTI-SPOKE CAST WHEELS

Strong and stylish, the CB500X’s lightweight multi-spoke cast-aluminum wheels—19-inch diameter in front and 17-inch rear—are easy to keep clean, look great, enhance handling and are another CB500X feature that just makes sense. The new front wheel is 100 grams lighter this year too.

The CB500X seat gives you an open, unrestricted riding position that’s perfect for both touring and commuting, and that still offers room for a passenger. The seat’s narrow shoulders make it easier to put your feet down at stoplights or in parking lots.