Visit site
To say that the decision of Yamaha to retire the YZF R6 in 2020 and have a year without a 600cc class supersport was a controversial move is quite possibly the understatement of the century so far. Often touted as the best supersport for the money, even when compared to the more powerful and less expensive Kawasaki Ninja ZX-6 636, it was (and still is) a bike loved by many a track day enthusiast. However, Yamaha replaced the R6 with something that is possibly, in the supersport world, even more controversial.

When the 2022 Yamaha YZF-R7 was teased without any specs about it, the initial thought was that Yamaha was going to up the size of the inline-four engine from the R6 to give it more grunt, more torque, and finally settle the issue of which mid-tier supersport was the king of the track. As such, when the R7 was announced to be coming with a parallel-twin engine instead of an inline-four, the motorcycle forums around the internet exploded.

Some called it an unprecedented misstep by Yamaha, missing the mark of what supersport riders want. Others called it a brave decision that was in keeping with the times. No matter what side of the argument you personally landed on, there were points to be made for either side. However, there is one very important point that many either didn’t know, or intentionally didn’t mention: This isn’t the first R7.

A Look Back At the Previous YZF-R7​ 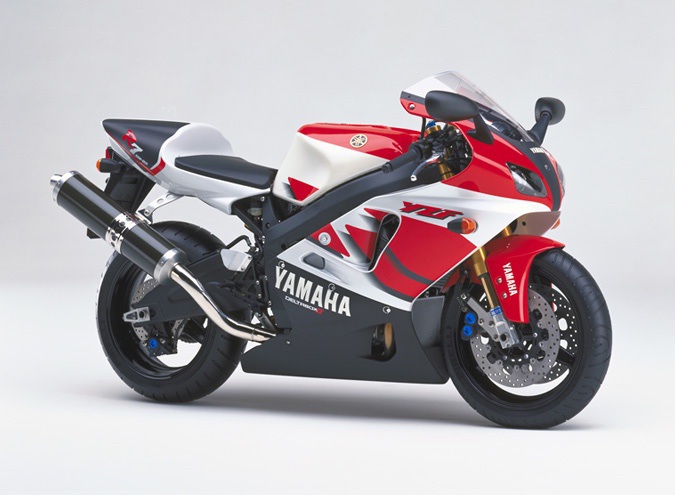 Take a look at that picture: a beautiful, low riding, aggressive supersport. The at-the-time racing colors of Yamaha (red and gray). A big, 749cc inline-four lifted directly from the racetrack that could push out 140 HP. This was a bike that was built for racing directly from the factory, and met the 1999 road legality requirements for the United States… just. Mostly because they stuck two mirrors on it.

The engine was the real gem of the bike, a 749cc super lightweight chunk of steel, titanium, and aluminum. In the YZR-R7, or, in race trim, the OW-02, that engine had five valves, two separate injector banks (depending on which version of the bike you chose) and multiple maps you could flash to the ECU.

The reason for all of this technology is that the engine, and ostensibly the bike, were designed to compete in the Superbike World Championship (the previous name for World SBK) and 8 Hours Of Suzuka endurance race.

The bike also used a version of the ultra-lightweight frame that had been developed for the Yamaha YZR500 race bike competing in the newly-formed MotoGP World Championship. This meant lightweight aluminum, a race-proven chassis, titanium nuts and bolts, a directly mounted engine as a stressed member—all of which is to say that it was one of the most direct translations of a race bike to the street ever made, and this is just three years after the legendary 1996 Ducati 916 Supersport was released.

The reason the first R7 is not well known, however, is because it is exceedingly rare. Only 500 were ever made, to meet homologation requirements, and of those, only 50 made it to North America. Of those 50, 10 went directly to Yamaha-supported race teams, so only 40 made it to showrooms and order sheets.

After so much development and effort put into making a championship-level 750cc bike with the YZF-R7, the simple answer as to where it all went was that the 21st century happened. The Superbike World Championship rebranded to World SBK, and focused on the two largest categories of street-available machinery, 600cc and 1,000cc.

MotoGP actually started to call itself MotoGP instead of the Motorcycle World Championship, and the 500cc class was retired in favor of “GP” level machinery with 900 to 1100cc engines in a variety of builds like inline-four or, famously, V4 or V5. 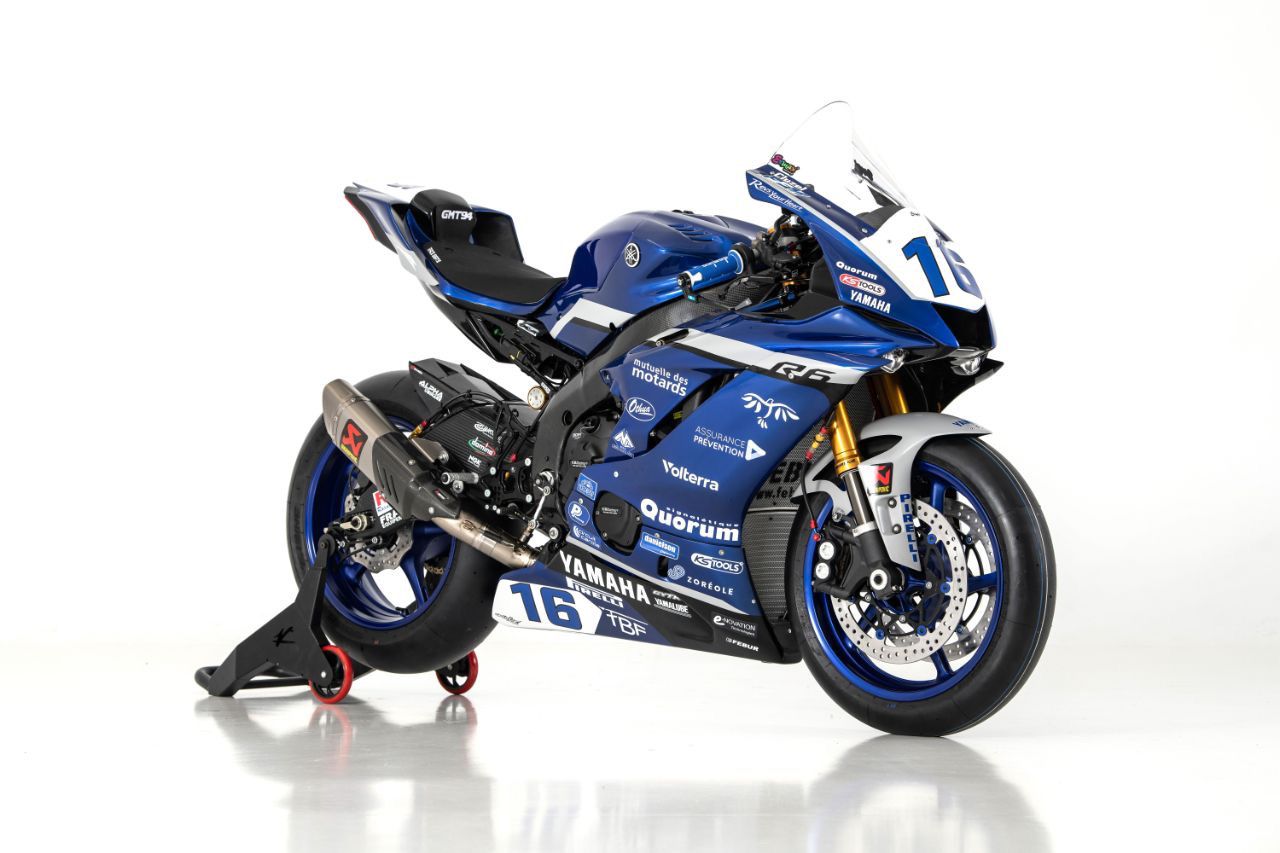 A World SSP600 Yamaha YZR-R6. Notice how despite the bike being as cut down and aerodynamic as possible, it is still “fat” around the engine case, which in World SBK series must be the same size as the road-going version. Image courtesy of Yamaha Racing

The only series of racing that kept a 750cc class of racing was rallying, and since the R7 was a supersport and not a desert-crossing enduro or ADV, it simply slipped into the annals of history. There are those that still remember it, however, and once in a while, an OW-02 flashed YZF-R7 will show up at an auction. When they do sell, they demand $70,000 or more, so even if you wanted one today, you’d have to take out a few lines of credit against your mortgage to afford one.

The biggest thing that happened, however, was that alongside the 1999 YZF-R7, a popular little pocket rocket called the YZF-R6 appeared. It was the first production 600cc class bike to produce over 100 HP, it was distilled down from the YZF-R1 to be a smaller but just as capable street machine, and it was, above all, priced competitively. Just to tick off those checkmarks: Over 100 HP? Check. Under $20,000 (when the R7 was $32,000)? Check. Based on the extremely popular R1? Check. 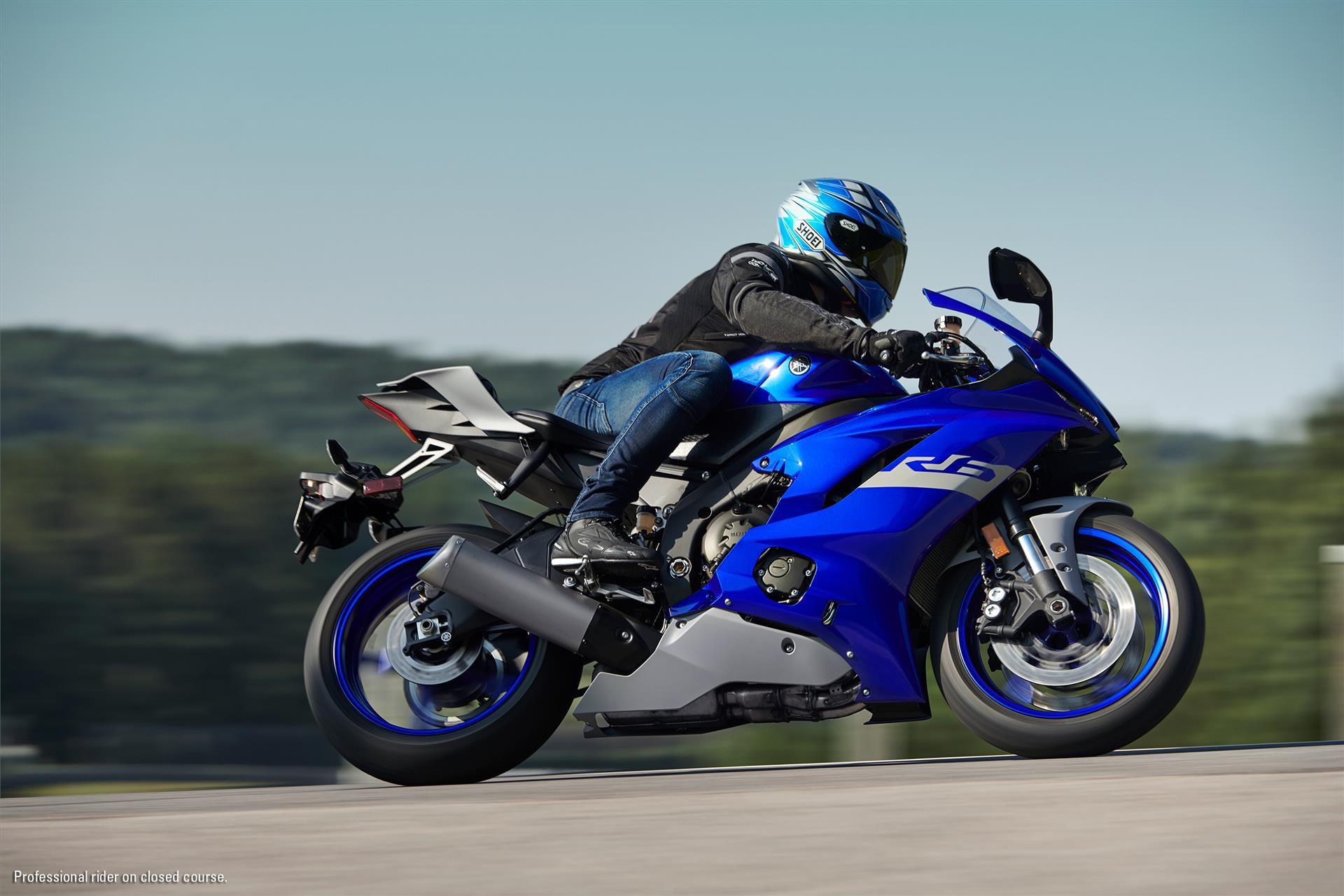 The last year of the YZF-R6, 2020, saw a bike refined over 20 years take its final bow. Image courtesy of Yamaha Motorsports USA

Yet, something has begun to happen, another dynamic swing in the racing world that caught Yamaha’s attention, among many others. After the American Motorcycle Association racing series nearly folded, with a new ownership group swooping in at the 11th hour to buy up the entire series, a new series called MotoAmerica emerged and brought with it something that has since reset the playing field…

The Rise of SuperTwin Racing​

In 2018, MotoAmerica, having masterfully negotiated with race tracks, TV promoters, and having a PR team that was invested in growing the series, dropped the Superstock 600cc class, a carryover from the AMA days, and introduced the Twins Cup, or as it is unofficially known, the SuperTwin class. It was, in all fairness, a stroke of genius.

After buying up the series, and aggressively promoting it in every state, at every race track while leveraging the internet to bring races to audiences via their own streaming service (or posting them a week after the race on Youtube), the interest in motorcycle racing soared.

Yet, as shown by many European junior series championships, getting into bike racing, much like getting into open-wheeled formula racing, is a very expensive proposition. So what do you do when you have young, enthusiastic, potentially world champion-level riders that are a bit tight on money?

You introduce a racing class that uses parallel-twin engines between 600 and 800cc’s, with a minimum weight of 300 lbs, with a special set of rules for V-twin engines so that the competition remains fair. 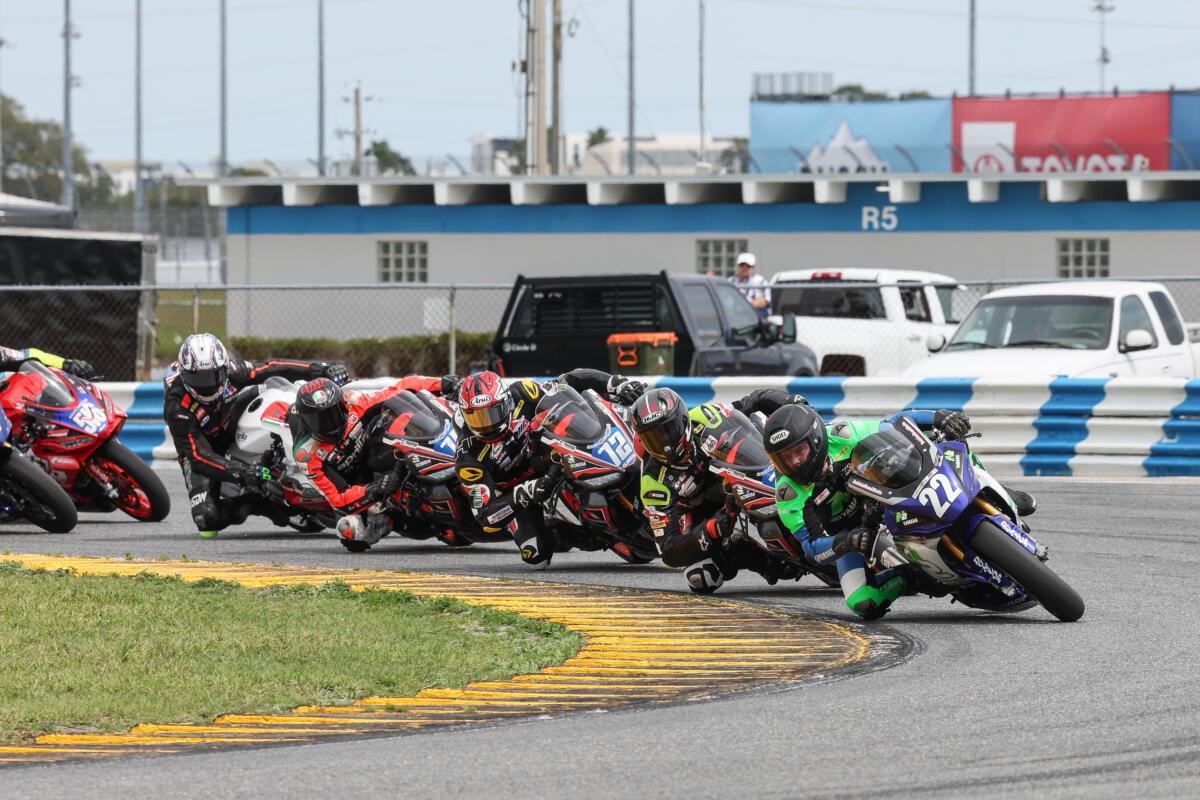 2022 Daytona SuperTwins, aka Twins Cup Championship, the opening race of the 2022 MotoAmerica season. Out in front of the pack is race-spec 2022 Yamaha YZF-R7, rider: Davis. Image courtesy of MotoAmerica.

That first year, in 2018, the SuperTwins class saw Kawasaki Ninja 650s, Suzuki SV650s, Yamaha FZ-07s, Ducati Monsters, and many others appear on the grid. Skilled, popular riders like Chris Parrish and Alex Dumas joined the championship (the 2018 and 2019 champions, respectively). Sponsors flocked to the class, as it was “the closest thing to racing your bikes at home on the track,” and many riders have started their careers and sponsor relations through the SuperTwin class.

Yet, the Yamaha FZ-07 (or as it was rebranded and turned into a supernaked, the MT-07) was an already aging platform. As well, SuperTwin classes, because of how popular the class is in America, have started to pop up in Europe, Australia, New Zealand, and many parts of Asia. SuperTwin racing is also in serious consideration to be a new class added to World SBK, to run as a Junior class alongside SuperSport 300. 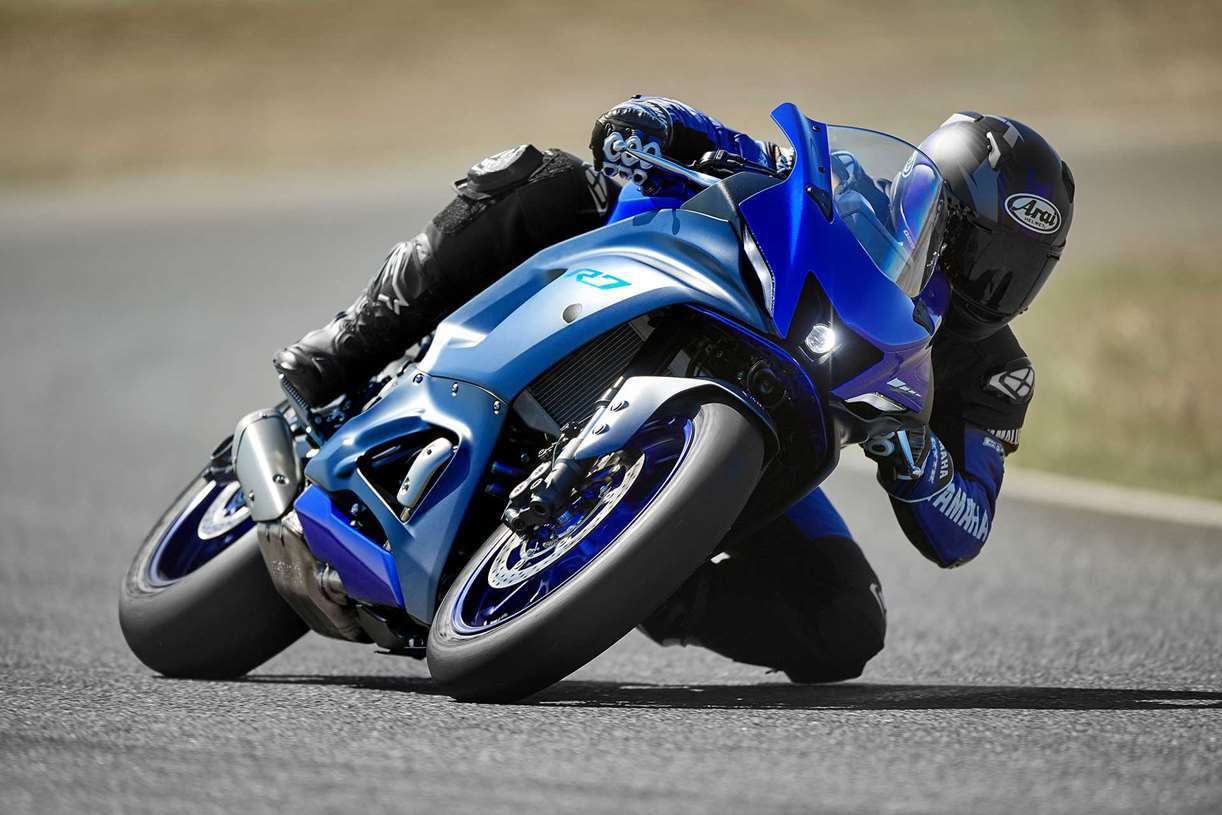 The Yamaha YZF-R7, on paper, looks to be a far inferior bike to the venerable R6 it succeeded. The power difference is noticeable, at 73 HP compared to 117 HP. The R6 could rev to the stratosphere, while the R7 redlines at just over 10,000 RPM. The R6 had an aggressive, low, prowling stance, while the R7 looks much more like a sport-tourer than a supersport.

However, don’t let paper dictate why the R7 is a worthwhile successor. That parallel-twin engine is the same one that is raved about in the MT-07 supernaked, the 689cc CP2. It is motivating a bike that, due to having a smaller engine, is much more slim and sleek than the R6, meaning there is less air to be deflected around the front, and the R7 is shaped to pierce and flow that air in the smoothest way possible. As well, because of the smaller engine, the R7, fully wet and ready to ride, weighs 414 lbs, while the R6 weighs 416 dry.

The most important point of comparison, however, is displacement. The R7 is so named because in the two cylinders it carries, it displaces 689cc. The R6, across four cylinders, displaced 599cc. As they say in the muscle car business: There’s no replacement for displacement. There’s a reason why they use big V8s, with big pistons thundering away in them. It’s all great and good to have a ton of horsepower, but if you can’t get the damned thing moving, there’s no real reason to take it to the drag strip. 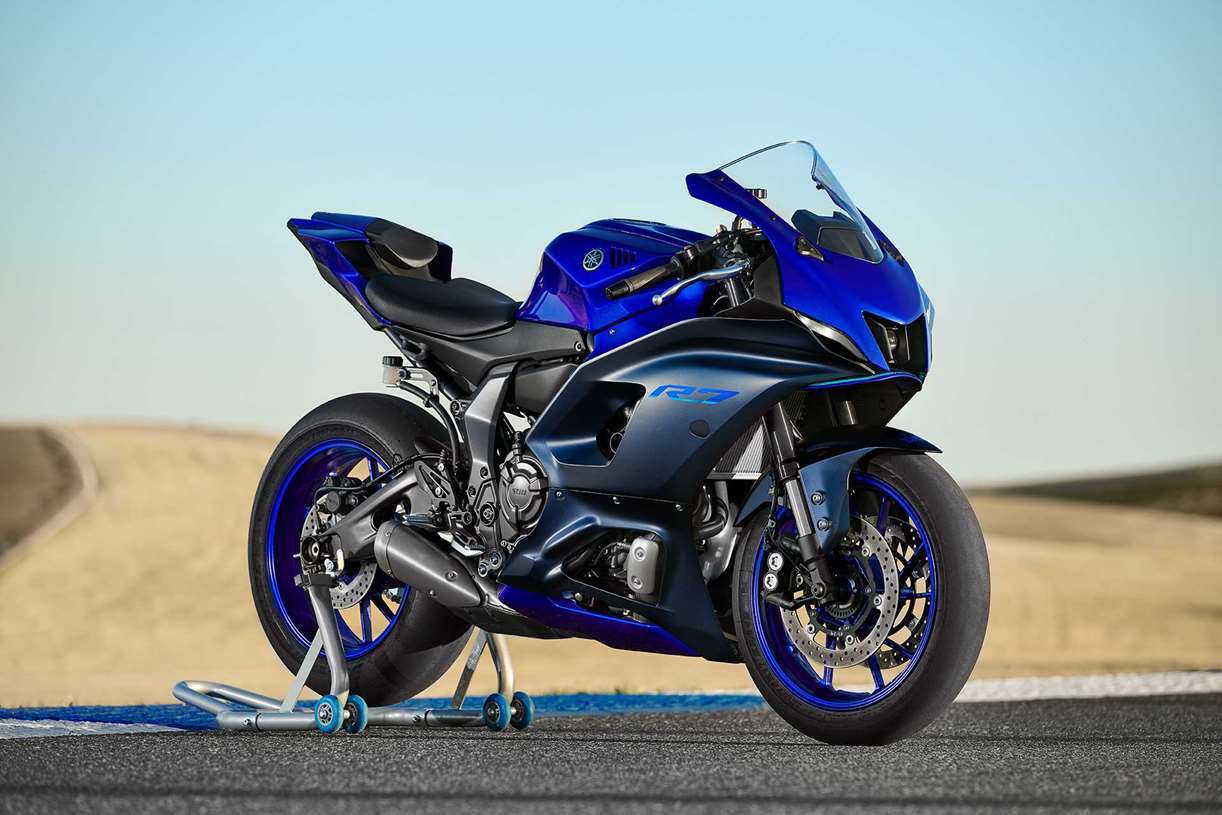 That is why the YZF-R7 was brought out. Take a torque-monster engine, put it into a supersport body, and subject it to all the testing needed to gain SuperTwin certification. When you compare the torque of the R7, 50 lb-ft @ 6,500 RPM, to the R6, 42 lb-ft @ 11,000 RPM, and add in the popularity of the SuperTwin class, Yamaha suddenly doesn’t look quite as “out of touch” as many have said they are.

Much like the original 1999 R7, the 2022 R7 is a purpose-built bike, with mirrors, headlights, indicators, and such slapped on to make it street legal. Underneath it all, however, a pure racing bike resides, and this time around, it’s coming out at a time when a racing class is just starting to gain steam.

Make no mistake: this is the right bike, at the right time, for the right price ($8,299 for those wondering), for a young, skilled rider to get their foot in the door of world-class motorcycle racing, and, much like a little known Italian named Valentino Rossi, who started out on 250cc two-stroke race bikes, maybe become the next world champion.

The post 2022 Yamaha R7: Why a Supertwin & Why Now? appeared first on webBikeWorld.

Yamaha Trademarks YZF-R9 In India, With Potential for Europe and America