Visit site
What are the characteristics of a the 270 degree parallel twin in terms of engine sound, vibration etc. I have a 2015 nc700 that's going in for its first 600 mile service. I bought it brand new. I had a bit of a concern that the engine had a clackity clack, almost piston slap(ish) sound at idle. I took it in and they listened and said it was just the character of the 270 degree engine. They even pulled another one off the floor and started it up.

Visit site
It's my understanding that the 270 degree parallel twin mimics a 90 degree v twin in terms of firing order. I don't see how that would relate to any piston slap noise. The clackity clack is probably the valves. If they're a bit noisy, that's good.

To be honest, we have 8 motorcycles and I couldn't tell you if any of them do or don't sound "normal." I just put in earplugs and go ride. They all work fine and last a long time. I wouldn't worry about it. Go ride.

Visit site
Some say that 270 degree firing order gives a more appealing vibration than 360 or 180. 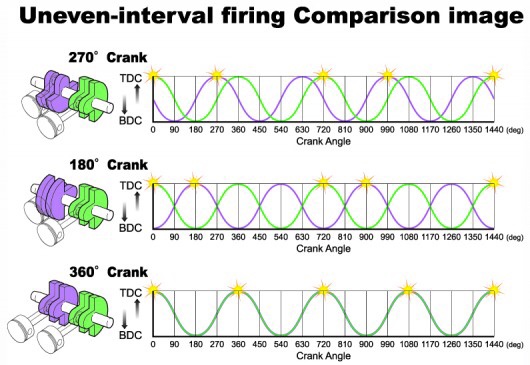 The 270 feels like it is running smooth, but has a subtle gallop that is almost imperceptible. It’s kinda like your favorite song that has a nice drum track with that little up-beat hit that just makes it sound right.

None of these firing orders have anything to do with clatter noise. The clackety-clack is how the mechanical valves were designed. It is also more noticeable since the engine runs at a lower, thumping rpm. The ears and brain can pick up on more of the individual tickety-ticks.

Visit site
Speaking blindly but to a familiar recurring subject in this forum........... The NC spends much of it's time in the lower rev range of motorcycle engine rpm, say 1800 to 4000 rpm. Coupled with the 270 degree off beat Bang Bang Long Pause Bang Bang firing cycle (see the above post) this motorcycle can feel like it's not running right with a lumpy type of pulsing vibration at lower rpms. This engine also has subtle intake timing differences between cylinders that contribute to the pulsing sort of throb that is entirely normal.

Many motorcycles have valve actuators that act directly on the valve while others like the NC have a mechanism that uses a lever of sorts to press the valve open. The former are very quiet in operation and the latter, like the NC, are characterized by tapping or clacking when the valves are pressed open and closed by the valve follower.

In short, this engine does vibrate a bit under load and makes clattering noises. I for one like the soft pulsing vibration at cruising rpms and liken it to a gallop or cadence that JT105 mentioned in the prior post.
S

Visit site
The other engine character noise of the NC that consistently comes up .........is the clutch, primary drive and transmission.
Pull in the clutch at idle the engine noise level changes a considerable amount.

Visit site
You guys have posted about the best explanation of firing order and the various effects that I’ve ever seen.

Visit site
Yep I agree with all said above, they can be rattly and somewhat noisy at times and other times quiet. These engines have many unique sounds including the sucking sound from the air box when cold on startup, and the metallic whistle from said airbox at times under full throttle. All such sounds have been analysed and put to bed over the past 6/7 years. As with any motor, You will know a really bad sound if you hear it. With these motors that is highly unlikely and there are very big mileages on some of them out there with no issues. That 270 crank plus the undersquare cylinder dimensions were a major factor in my having one of these brilliant bikes albeit mine is a variant and my second one to date.
J

Using the 270 arrangement, reduces the vibration intensity since the pistons aren't reaching the top or bottom at the same time.
This lets manufacturers use smaller counter balancers, and it supposedly helps with traction.

The NC's flattened engine layout makes the up/down vibration more forwards/backwards.
I'm guessing this has some impact on perceived vibration, but I wouldn't bet money on that.

New BMW's using the 360 firing arrangement, use a counter weight held that just goes up and down opposite the pistons, countering the up and down motion of the pistons without adding forward, and backwards vibration. The counter weight is kept from rotating with an arm, and a couple bearings.

Visit site
Glad I found this thread before I started typing, lol. I was about to ask about the vibrations this bike gives out. It's definitely a different feel than what I'm used to with single cylinder and older Honda twins, but so far I'm really loving my NCX. Got 85 miles on her now... now if it would only stop raining and stay above 60 out...

mr_et2 said:
Glad I found this thread before I started typing, lol. I was about to ask about the vibrations this bike gives out. It's definitely a different feel than what I'm used to with single cylinder and older Honda twins, but so far I'm really loving my NCX. Got 85 miles on her now... now if it would only stop raining and stay above 60 out...
Click to expand...

I just put miles 8-102 on my 2015 today. I also thought (even with earplugs and bad wind) I could hear or feel a ticking. Especially when trying to accelerate from a lower gear and rpm. I checked the oil and wrote it off to 4t break in. I'm going to call the dealer and find out what oil/wt they use. If it's really light I might take the weight up a few notches next time, especially for summer riding.

Did you notice your engine start to wake up and become more responsive around 75 miles?
B

Visit site
My calibrated butt says that the engine loosens up over a thousand or so miles. After 3000 miles, mine is running and idling better now than when it was new. Maybe it’s just a placebo, but it feels like it is.

There are many oil discussions on this forum. Please read those for discussions about other viscosities and brands. You won’t go wrong following the owner’s manual specifications on oil. There are many reports of bikes with well over 100,000 miles operating in all climates using 10W-30 as called out in the Owner’s Manual (10W-40 is also listed as acceptable in the Service Manual).

I haven’t read any reports about different oil changing the characteristic vibration of the 270 degree firing angle.

I should know better but I was born with hypertrophic-modifybia. I'll have to check out the oil threads. Never felt any real engine vibration, the engine is so smooth 6500rpm can sneak up on me. The biggest positive I feel while riding is handling and power delivery. Very easy to ride in a stop and go town or on the hwy.
You must log in or register to reply here.

Honda Is Working on a Supercharged Africa Twin

The Best Naked Motorcycles of 2020