2021 Triumph Rocket 3 GT: Laid-Back Riding With Even More Power Than Ever Before​

British motorcycle manufacturer, Triumph, has been building the Rocket 3 since 2004, but the current edition of this heavy-hitting cruiser/touring motorcycle looks nothing like its predecessors, nor is it even the same breed.

There’s a saying, “there’s no replacement for displacement”. Triumph has embodied this motto and designed an entire motorcycle around it. This new Rocket 3 GT is the highest displacement engine ever put into a production motorcycle. 2500cc’s to be exact. Yes, that isn’t a typo. Twenty-five-hundred cubic centimetres of displacement can be found in this engine. The styling of the motorcycle speaks for itself though, as this vehicle is mostly an engine with a seat and wheels attached.

You’re probably wondering what kind of power figures come along with a 2500cc motorcycle engine. The 2021 Triumph Rocket 3 GT produces 165 peak horsepower (11% more than the previous generation). You may be thinking “that isn’t a whole lot of power seeing as how manufacturers are breaking the 200 horsepower mark frequently with each new bike being released.” Behind the horsepower figures hides an even more impressive number: 163 lb-ft of neck-snapping torque giving this heavy-hitter a 2.89 second 0-62 mph. This motorcycle was built to chew up highways and the power numbers back it up.

This motorcycle is catered to cruising and long-distance touring, and the addition of Triumph’s all-new ‘Highway’ inspiration kit proves that; a 50 piece accessory line (unique to the Rocket 3) aimed at increasing comfort and practicality of your British-made cruiser to keep the long rides as comfortable as possible. This bike holds its head up high as the most well-suited steed for long-distance touring in Triumph’s 2021 lineup.

On this page: we’ve curated specs, features, news, photos/videos, etc. so you can read up on the new 2021 Triumph Rocket 3 GT in one place. 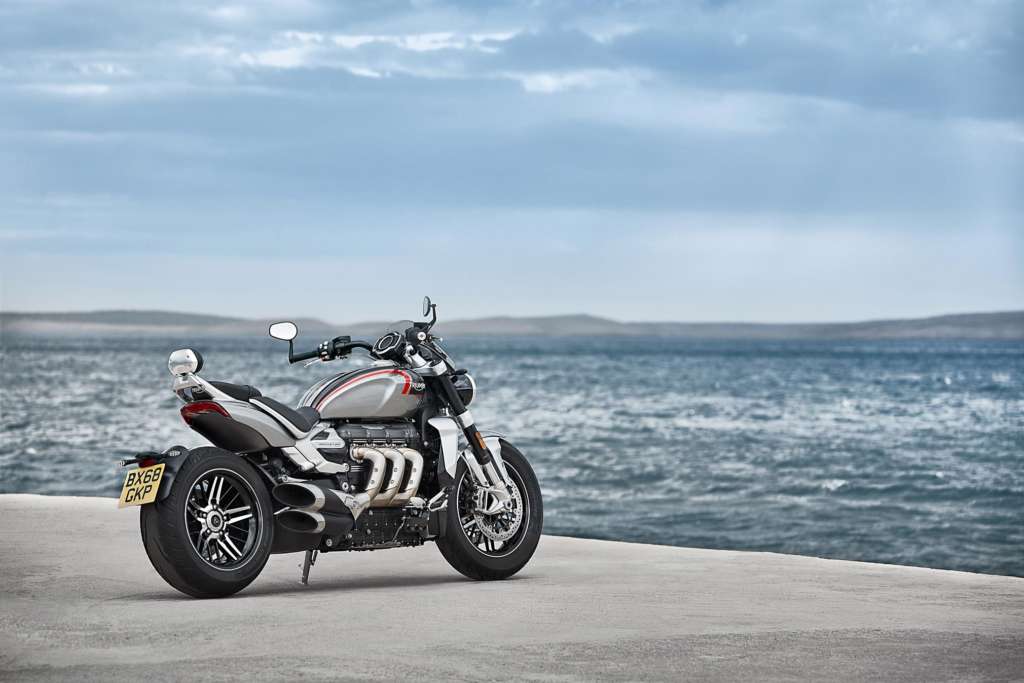 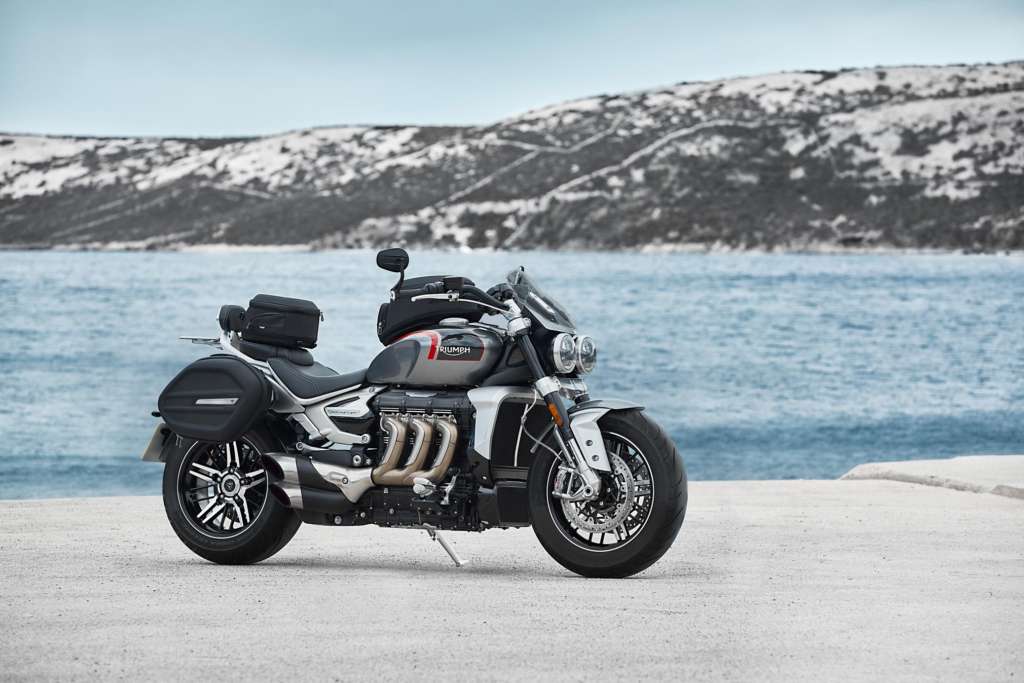 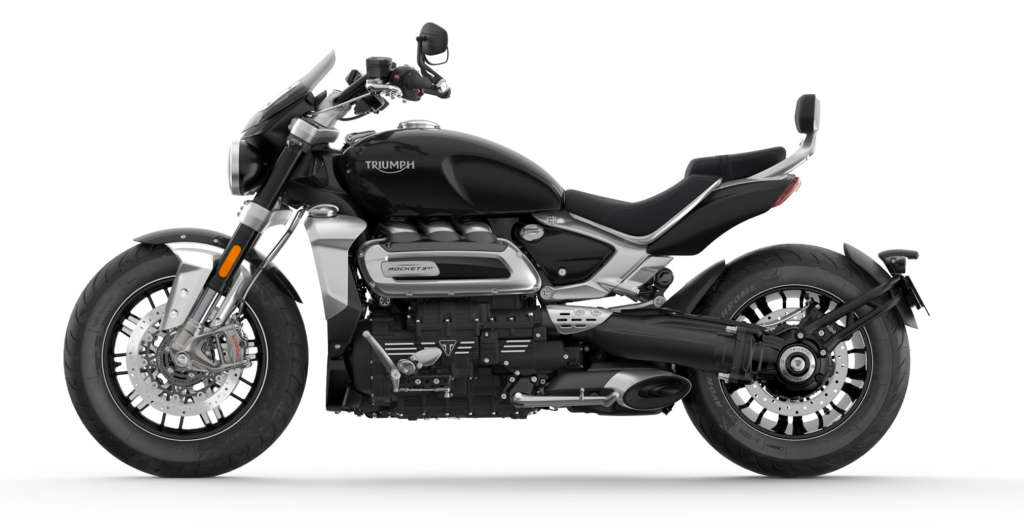 The previous generation Rocket already held the distinction of having the world’s largest production motorcycle engine (previously 2,300cc), but this next generation Rocket 3 lineup raised the bar even higher with an all-new 2,500cc Triumph triple which delivers an even higher capacity and performance. Incredible design innovations have found 39.68 lb engine weight savings over its predecessor with new mass-optimized crankcase assembly, a new lubrication system comprising dry sump and integral oil tank, and new balancer shafts. What’s more, this powerplant masterpiece is exquisitely engineered, with beautiful finish and detailing throughout including stunning machined fins on both the upper and lower crankcases.

The new Rocket 3’s performance figures have elevated this incredible motorcycle range up to a whole new level. The new Rocket’s peak power (165 HP @ 6,000 rpm) is 11% up on the predecessor Rocket and the new engine generates an increase in power from 3,500 rpm and all the way up to the new higher red line of 7,000 rpm. Peak torque – 163 LB-FT at 4,000 rpm – is a world best and a figure that’s a breathtaking 71% higher than the Rocket’s closest competitor and higher than the previous generation across almost the entire rev range. In practical riding terms, this translates to an acceleration figure of 0-60 mph in 2.8 seconds.

An extremely high level of equipment specification contributes to the incredible handling and comfort of the new Rocket 3 R and GT. This includes high-spec adjustable Showa front and rear suspension setups, and a cutting-edge Brembo brakes setup with the highest available specification Brembo Stylema® calipers to deliver an incredible braking performance and immediate response. The mass optimized aluminum frame of the new Rocket 3 lineup is an unwelded construction that has premium cast and forged components, making the frame lighter and contributing to a massive 88.18 lb weight saving compared to the predecessor Rocket. In addition, optimized cornering ABS and traction control, which is supported by an Inertial Measurement Unit developed with Continental, provide an enhanced level of riding stability to ensure optimum brake force, optimized slip rate and torque control that improves both straight line and cornering, acceleration and braking.

There’s no denying that the new Rocket 3 range delivers arguably the most powerful and distinctive silhouettes in motorcycling, guaranteeing a dominating presence wherever you ride. It conveys magnificent style to your riding with a host of signature design features, and the bike’s beautiful details bring an unparalleled level of finish and quality. Packed with motorcycling design innovations that create clean flowing lines, and adjustable ergonomics that deliver maximum comfort for all rider sizes, the new Rocket 3s have a genuine muscular presence to go with their all-day riding comfort.

The Rocket 3 enjoys state-of-the-art technology enhancements that transform the functionality and riding experience of your Rocket 3 ride. Higher functionality 2nd generation TFT instruments incorporate a stylish minimal design with two dynamic information layout design themes that can be tailored to suit preference, including a feature that allows the rider to personalize the startup screen message with their name.

In addition, on top of the optimized cornering ABS and traction control, other Rocket 3 technology highlights include four riding modes (Road, Rain, Sport and Rider-Configurable), hill hold control, cruise control, keyless ignition and steering lock, with heated grips as standard on the Rocket 3 GT (accessory fit available for the R).

The all-new My Triumph Connectivity System allows for motorcycle-integrated GoPro functionality with the camera operation displayed on TFT instrument screen and being easily controlled via the switchgear. There is also an all-new ‘MY TRIUMPH’ app delivering connected technology functions including route planner with turn-by-turn navigation. And you can also benefit from an integrated phone and music operation as well. 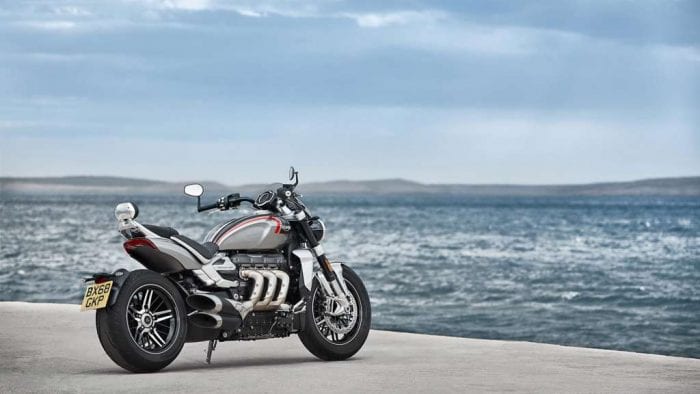 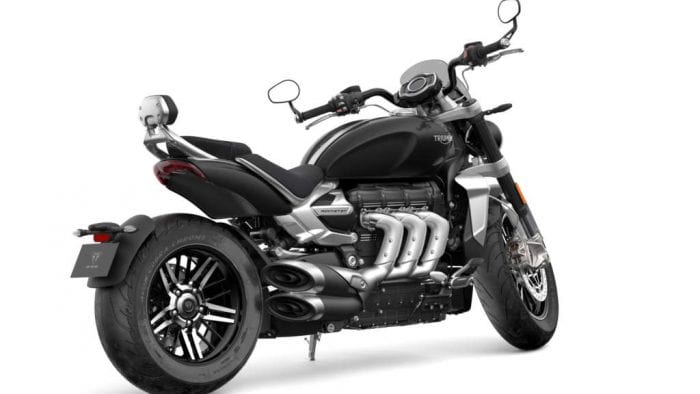 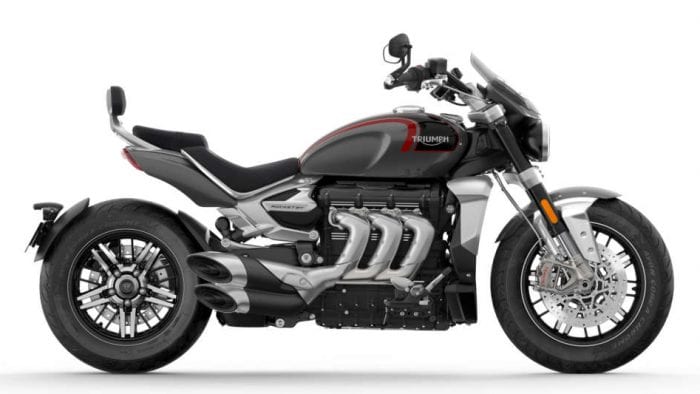 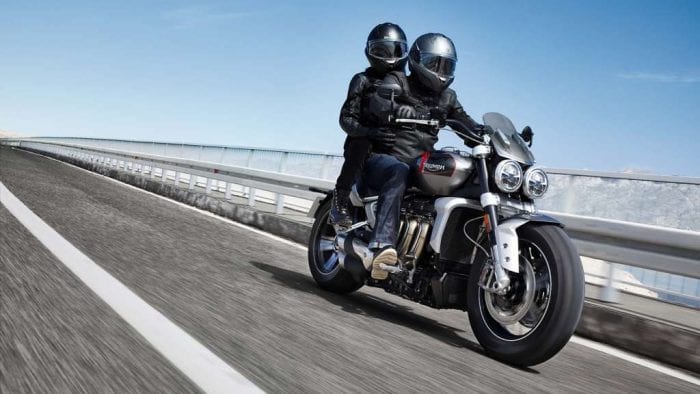 The 2021 Triumph Motorcycle Lineup + Our Take On Each Model